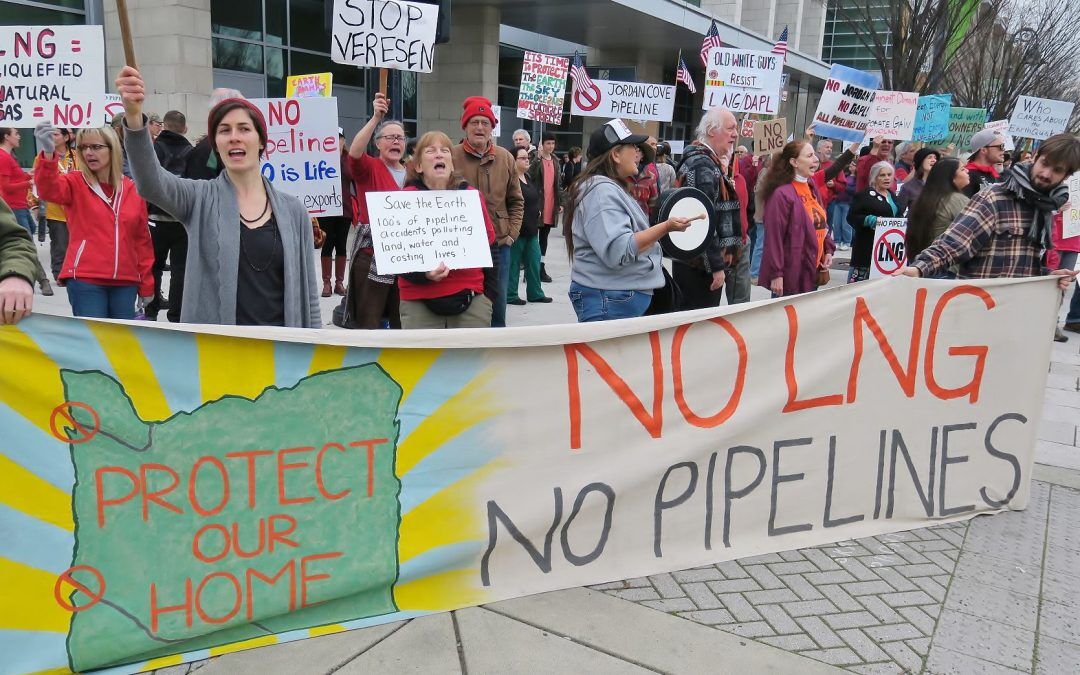 Here you will find calls to action -- opportunities to write letters, make calls, or send emails about a land use decision or policy matter, attend a hearing or a rally, or help with an ongoing project or campaign. 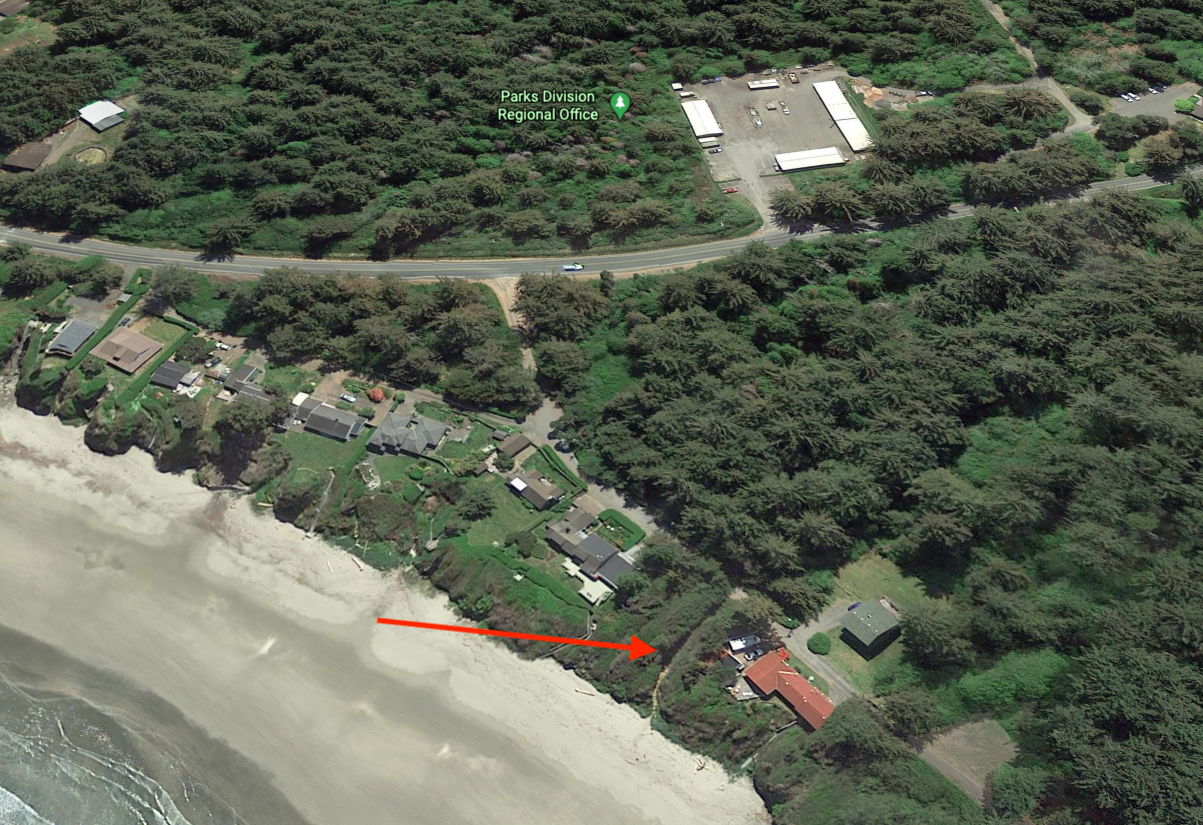 Public access has been threatened to Lighthouse Beach, a popular and well-loved stretch of shoreline near Charleston in Coos County.  We stand with our colleagues in the Surfrider Foundation in working to restore the public’s long-standing access, which has now been blocked. We ask all those concerned with public access to help by contributing to the legal effort that Surfrider is heading up.

Members of the public have used a footpath off Lighthouse Way to reach this special beach for generations, but current landowners have now fenced it off. Surfrider members, Oregon Shores members (including two of our board members!) and members of the public need this pathway (the only viable means of getting to the beach here) to reach the shore not only for surfing and other recreation, but also as stewards of the beach and community.

We’re working with Surfrider’s legal team, which is currently investigating the historical public use and access at Lighthouse Beach and exploring all appropriate solutions.  They need our support to continue this work. Donations to this campaign will support the effort to restore access to Lighthouse Beach, including helping to fund attorneys' fees incurred by retaining outside expert counsel. Any excess funds will be used for stewardship at Lighthouse Beach.

To contribute or to learn more, go to https://oregonshores.org/lighthouse-beach-legal-fund. 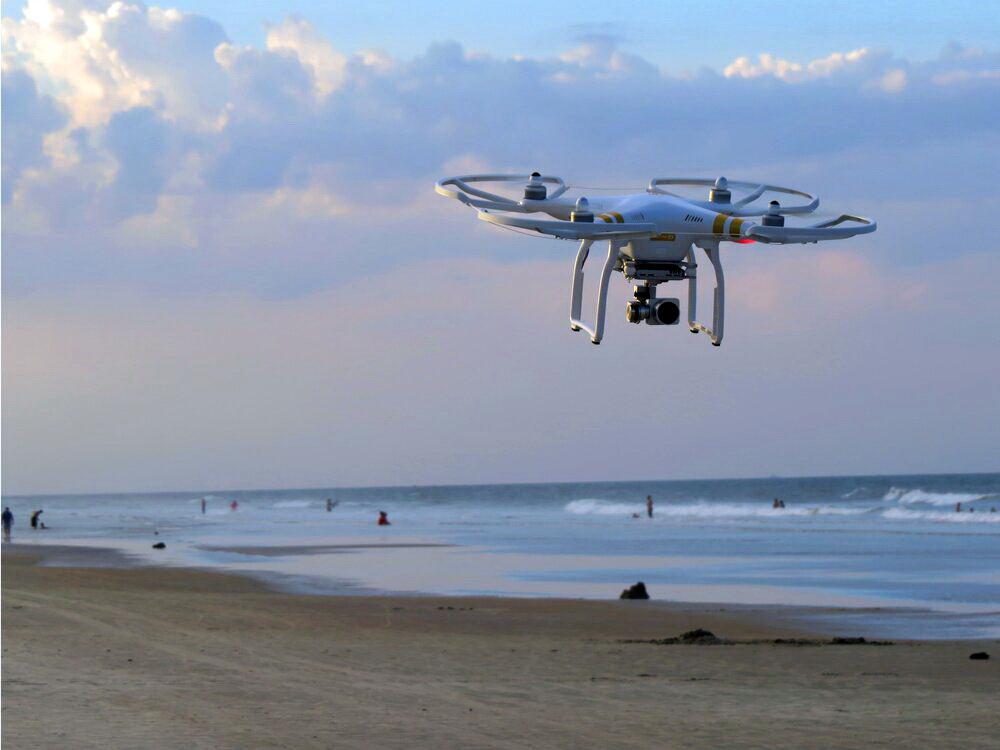 The Oregon Parks and Recreation Department (OPRD) is drafting new regulations to govern the use of drones in state parks.  Since the department manages the entire Oregon shoreline, these regulations will be particularly important where the public beaches and coastal wildlife are concerned. OPRD can’t regulate where drones fly, only where they take off and land.  However, operators are supposed to keep drones in sight, so prohibiting take-offs and landings in buffer zones around important habitat areas can protect them from being buzzed, disturbing wildlife (not to mention human visitors).

The public has through April 15 to send comments: [email protected]. There will also be an opportunity to comment during the April 13 hearing to be conducted by the Oregon Parks and Recreation Commission.  For more on this meeting, go here.

Public comment could help to protect nesting and migratory birds, marine mammals, and other wildlife from drone disturbances. Over a million seabirds and shorebirds nest along Oregon’s coastline every year, including the endangered Western Snowy Plover and species of concern like the Tufted Puffin and Black Oystercatcher. Limiting drones through these regulations will also help preserve peaceful experiences for those who want to explore Oregon’s natural places and to recreate safely.

Wildlife disturbances due to improper drone use are increasing on the Oregon coast. Last year the Oregon Black Oystercatcher Project documented a rate of over three drone disturbances per week at active Black Oystercatcher nests. Oregon’s iconic coast and state parks are popular visitor destinations. As visitation increases we need to be proactive to minimize wildlife disturbance; drones add to the difficulty of preserving natural habitats. Drone use must be restricted to limited areas where it is certain that it won't disturb wildlife or ruin the shoreline experiences of the vast majority of visitors who don't wish to see drones.

To learn more about the concerns raised by drones, and find material to use in your own comments, see the extensive comments Oregon Shores is submitting along with a number of other conservation groups.

Your comment is valuable, even if you just make a basic statement of your position, along the lines of:  I support the strongest possible restrictions on drones in state parks and on the ocean shore.  Drones are a serious threat to wildlife, and their presence spoils the experience of being in a natural area. Drones should only be permitted, if at all, in areas where it has been carefully determined that there will be no impacts to wildlife and no degrdation of the visitor experience for others.

If you want to go into more detail, here are some talking points to emphasize in your comments:

The draft rule revisions that are being considered can be seen in this document. 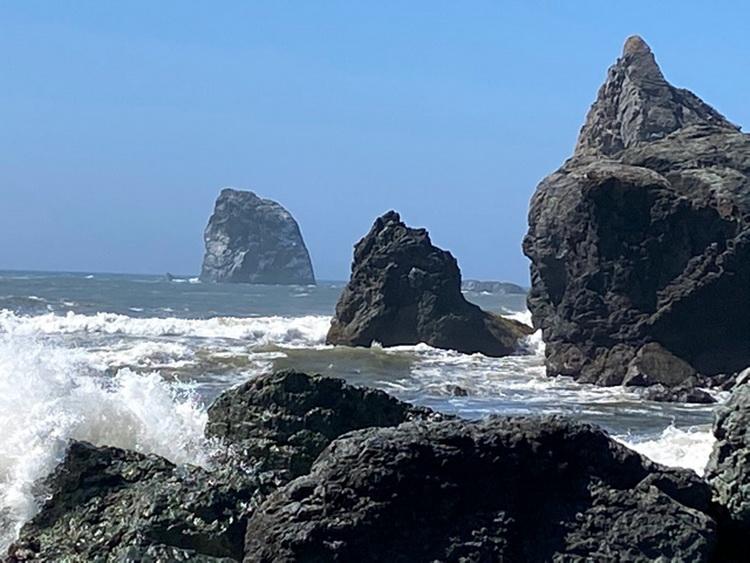 Oregon’s coast has a history of public participation, and public involvement is actually a required part of public planning. On the coast, Oregon Shores and CoastWatch encourage members and volunteers to learn about beach and rocky shore rules and regulations and to engage in their local community’s decision-making.  There will be soon be opportunities to advocate for protection of key rocky habitat areas later in spring of 2022.

In 2018, the Oregon Department of Land Conservation and Development invited Oregon decision-makers and non-governmental organizations, including Oregon Shores, to discuss updating the 1994 Rocky Shores Management Strategy chapter of Oregon’s Territorial Sea Plan (TSP). According to the Oregon Ocean Resources Management Program, the TSP acts as a coordinated vision for marine resources in Oregon and guides the actions of state and federal agencies that are responsible for managing coastal and ocean resources in the public trust. The amended rocky habitat plan seeks to incorporate the best available science and consider the needs, concerns, and values of Oregonians balanced with the state’s goals for a resilient coastal ecosystem that can provide enduring opportunities for its users.

As part of this process, important rocky shore habitat areas are being considered for "site designation" under several protective categories.  Citizens and communities were invited to propose such sites.  In the first round, 12 sites were proposed (Oregon Shores was involved in supporting eight of these).  The Ocean Policy Advisory Council (OPAC) favored two sites, at Coquille Point in Coos County and Cape Blanco in Curry County, recommending protective designations.  In addition, six other proposals are still alive and in  “continuing consultation.” They will be evaluated by OPAC sometime this spring; exact dates are yet to be determined. These sites include Ecola Point and Chapman Point in Clatsop County, Blacklock Point in Curry, Cape Foulweather, Cape Lookout in Tillamook, and Fogarty Creek and Cape Foulweather in Lincoln. The Department of Land Conservation and Development (DLCD) and the Oregon Coastal Management Program staff will schedule and host public consultation workshops between the agencies and the proposers. Proposal authors will be provided the opportunity to present their proposals during the workshops and to describe or comment on any further work to resolve considerations identified in the process.

We will announce the schedule for these opportunities to engage and comment when they are known. 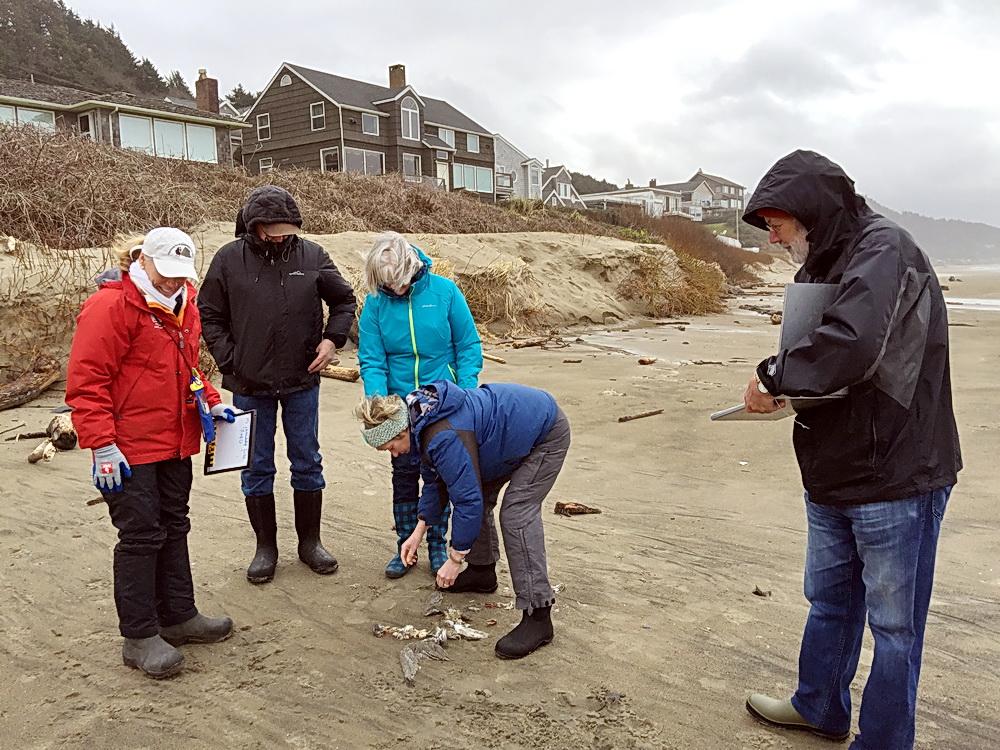 Oregon coast citizen science projects are both seasonal and year-round. Some take place in the dunes and others in the rocky habitats or on the sandy beach. All projects consist of monitoring and surveying, and contribute information that teaches us about the health of our sea, beaches, waters and shores. Through CoastWatch, volunteers are encouraged to work with our conservation partners including local non-profits and researchers at colleges such as the University of Washington, University of Oregon, University of California and Oregon State University to monitor and survey plants and wildlife on the Oregon coast. To learn more about these opportunities, visit our Citizen Science Projects page.

Adopt a Mile of the Coast 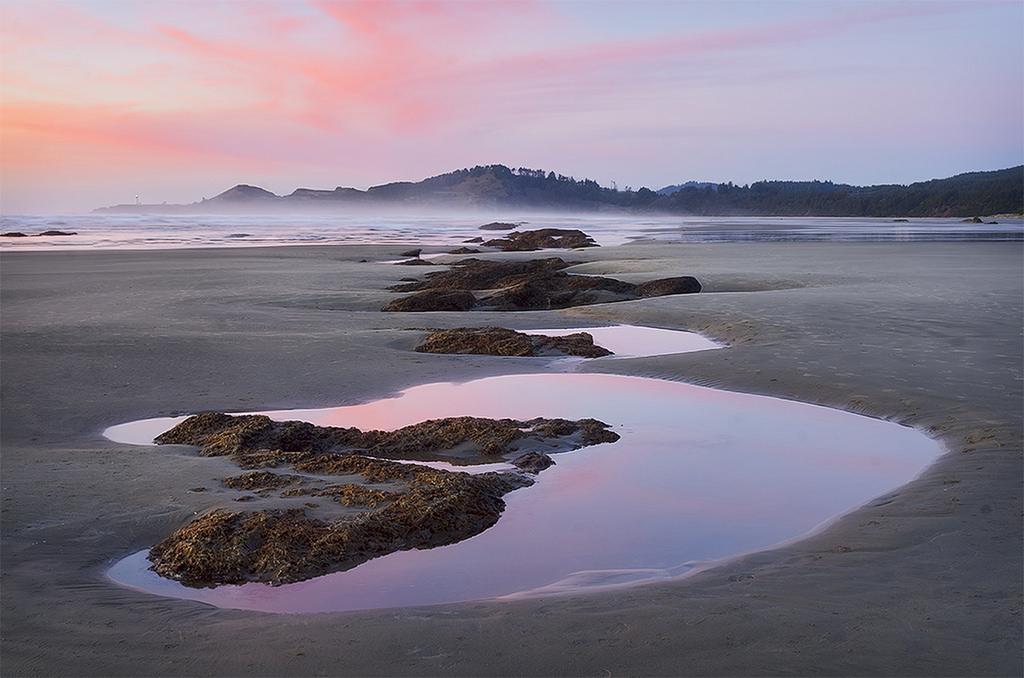 One way to take action now, for those who are not already CoastWatchers, is to adopt a CoastWatch mile.  It is our goal to attain coverage of every mile of the Oregon coast through CoastWatch on a regular basis.  You can help us reach this goal by adopting a mile that is not receiving regular coverage. 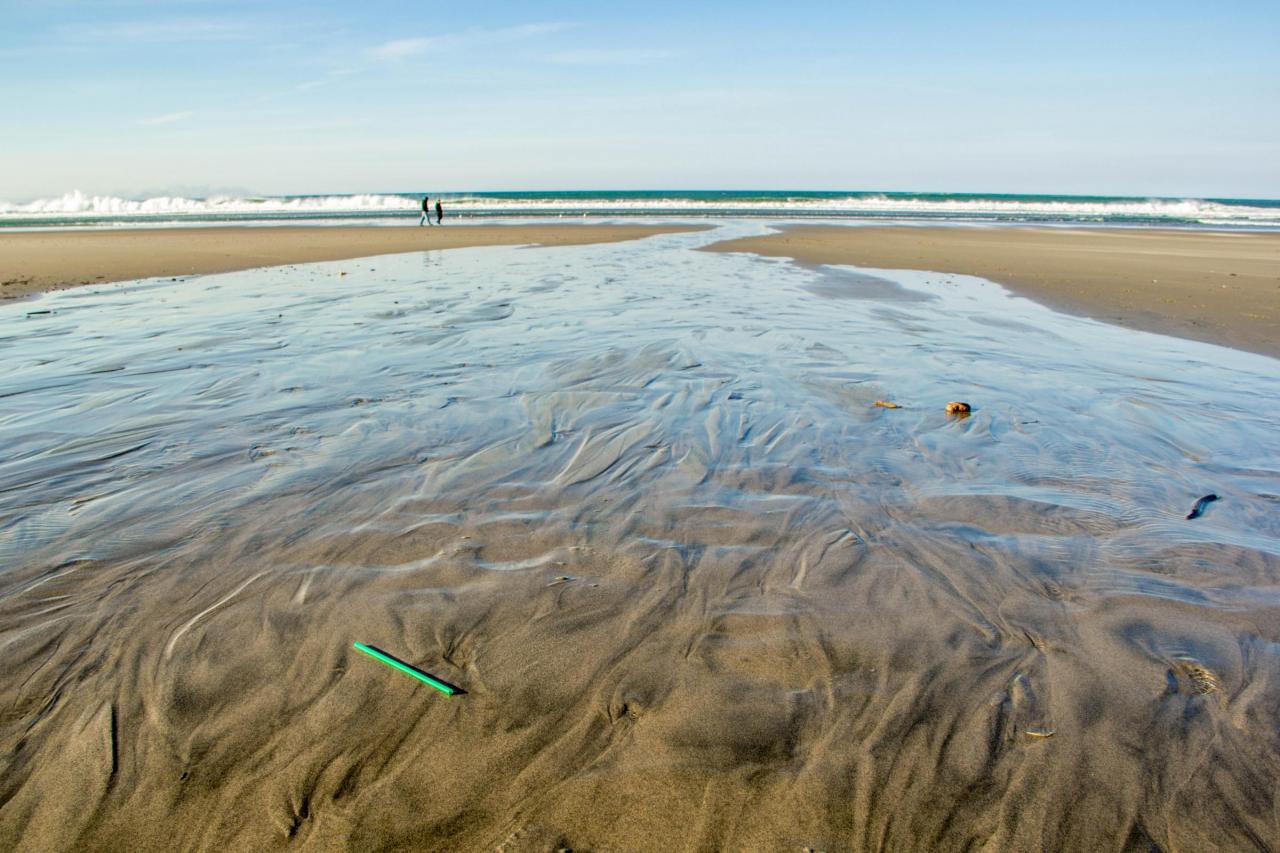 Plastic straws are among the most common items found at Portland Chapter Surfrider cleanups – both on the Oregon coast and in Portland! They are also one of the most common items found elsewhere in the country.  They not biodegradable, which means that every plastic straw created is still around in some form. Plastic has a huge impact on our ecosystems, wildlife and people, and it is the chapter’s goal to reduce the amount of plastic that ends up in the environment.

In August 2017, the Portland Chapter of the Surfrider Foundation launched the DitchTheStrawPDX program in the Portland-Metro area. The mission of the program is to assist businesses in reducing the number of plastic straws used by their customers. The chapter provides support to these businesses who agree to go straw free for an entire month as a pilot program demonstrating that paper straws are a sustainable, cost-effective alternative.

Are You a Business Interested in Participating? Join their movement to reduce plastic straw pollution by piloting a straw-on-request program for one month. Eliminate plastic straws by only providing paper straws upon request. Click Here & Help Be Part of the Solution.

Are you an individual who wants to participate? Next time you’re out, simply ask for no straw, post a photo and tag (@SurfriderPortland) and #DitchTheStrawPDX on social media! They need your help to spread the word and the message. Interested in supporting this program as a volunteer? Contact [email protected].