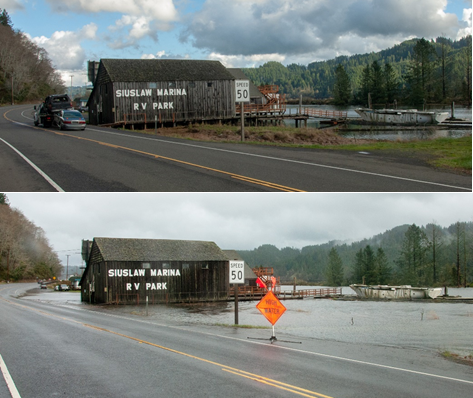 The past winter’s edition of the King Tides Project, the 11th year of this annual citizen science effort, had a new feature.  This time around, we partnered with the Oregon Coast Visitors Association to sponsor a photo contest.

The goal of the King Tides project is to document the winter’s highest tides, to raise awareness of the impact of high water and storm surges on the coast at present, while providing a preview of coming sea level rise.  Oregon Shores and the Oregon Coastal Management Program partner to conduct the Oregon branch of this international volunteer collaboration.

The contest had more than 400 submissions. A committee of judges voted for their favorite submissions from a group of 28 finalists. Photos were chosen that best showcase the vulnerability or resilience of people, places, and things impacted by the king tides in Oregon’s coastal communities.

First place went to John Bragg for his photo of the Siuslaw Marina and Store at Cushman on Highway 126, four miles east of Florence.  Bragg matched photos taken during a king tide with a shot from same location taken during an ordinary high tide.  He receives a $100 gift card from the Oregon Coast Visitors Association.

To view the finalists and all other king tide photos submissions, go to the Oregon King Tides Project website: https://www.oregonkingtides.net/ or the project’s Flickr: https://www.flickr.com/photos/orkingtide/page1.