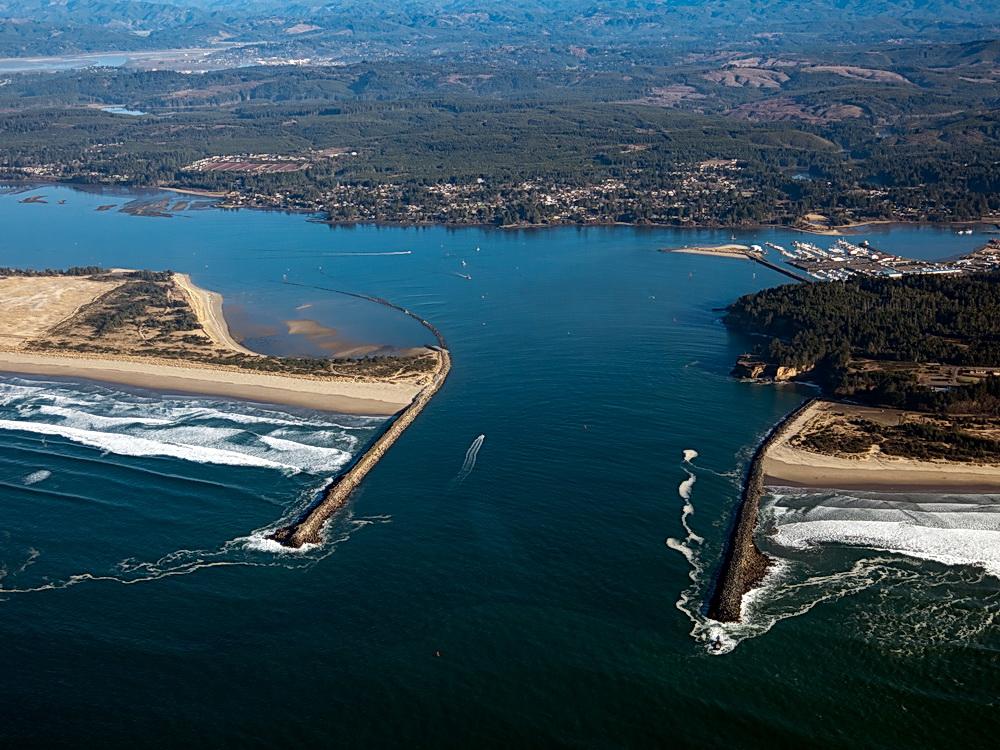 "Hurry up and wait" is an old Army saying, and it fits the battle over the proposed Jordan Cove LNG (liquefied natural gas) export terminal.  Oregon Shores, along with many allies, has been battling to prevent this threat to public health and safety and to the North Spit and Coos Bay estuary for more than a decade.  Still, 2019 may prove to be the final confrontation.  Jordan Cove, now owned by the giant Canadian corporation Pembina, has filed again with the Federal Energy Regulatory Commission (FERC), and FERC has indicated a timeline leading to a decision within a year--not that such schedules haven't slipped before.

Indeed, that is what happened with the approval process for the essential water quality permits the project must receive from both the U.S. Army Corps of Engineers and the state's Department of Environmental Quality (DEQ).  The public comment period concerning water quality certifications from both the Corps (Section 404) and DEQ (Section 401), essential if the Jordan Cove project is to move forward, was extended over the summer.  To date, more than 43,000 public comments have been received on the issue.  The coalition working to oppose the development of both Jordan Cove and the associated Pacific Connector pipeline submitted extensive comments opposing certification for the LNG terminal and pipeline.  Through our Coastal Law Project, a partnership with the Crag Law Center, Oregon Shores contributed key components of the collective document.  See our comments regarding the state 401 certification for background on the issue.

And then, after all the work was done, Jordan Cove withdrew its application.  We now await the next round in this particular arena.

The same thing happened with the permit process for dredging through the estuary for the pipeline that would bring natural gas to the export terminal, where it would be chilled and shipped.  Jordan Cove filed an application with the state's Department of State Lands, which governs the estuary bottom, Oregon Shores and other opponents began developing comments in opposition....and Jordan Cove withdrew this application as well.  Again, we wait.

The would-be developer behind the Jordan Cove Energy Project--at the time Veresen, Inc., since purchased by fellow Canadian multinational Pembina--was turned down in 2016 by the Federal Energy Regulatory Commission (FERC), on the grounds that the company had failed to demonstrate a public benefit that would outweigh the harm the project (especially the pipeline) could do to communities and property.  The company's local land use permit, approved by Coos County, was appealed to Oregon's Land Use Board of Appeals by Oregon Shores and local partner Citizens Against LNG.  Our appeal was successful, and ultimately affirmed by the courts, so Jordan Cove was thwarted at that point.  The local land use process, where Oregon Shores will continue to take the lead for the coalition opposing the LNG scheme, may once again prove the bottleneck where the entire project can be blocked.

However, in the wake of the 2016 election, knowing that newly elected President Trump would be appointing new FERC commissioners likely to be sympathetic to energy development, Jordan Cove started the process all over again.  But after that, while there was furious activity behind the scenes, there was little publicly visible movement on the Jordan Cove front until this spring, when the company applied for its water quality permits, and the state and federal processes got underway.  These are the regulatory reviews that have now been delayed.

In addition, Jordan Cove submitted its application to the Oregon's Department of State Lands (DSL) for the dredging and filling in the Coos Bay estuary required for the LNG terminal and its associated pipeline.  The application was submitted May 10, and DSL began its "completeness" review, but it was hurry up and wait again.  The company, which has a pattern of submitting incomplete applications, withdrew the application June 5.  Oregon Shores will be heavily engaged in this review, once the company finally submits a supposedly complete application.  If and when the applicant eventually files an application and the department determines that this time the application is complete, a comment period will begin, which will include at least three public hearings.

When the Corps of Engineers and DEQ begin new reviews of whatever water-quality application Jordan Cove eventually files, members of the public also have more time to comment. For instructions on how to comment, go here.

Oregon Shores, working through our Coastal Law Project (a partnership with the Crag Law Center), will be raising a range of objections as part of all these processes.  Our key arguments include: dredging and filling in Coos Bay and associated wetlands adjacent to Henderson Marsh and Jordan Cove (the place, not the company) will do unacceptable damage to these important aquatic resources; additional dredging along the main navigational channel to allow access to LNG tankers will alter habitats in the estuary and may impact clamming and crabbing areas; the applicant hasn’t established that its plans for “mitigating” the damage done to the estuary are in any way adequate; the method for drilling a pipeline under the bay is unproven; once the terminal is operation, the LNG vessels transiting the bay will interfere with the ability of other boats to access public trust resources in the bay including fishing and shellfish areas.  There will be more, once our comments are complete.

We’ll be fighting with public opinion at our backs.  A recent survey by a professional public opinion firm discovered that 57 percent of Oregonians strongly oppose the Jordan Cove project or lean toward opposing it, while 22 percent strongly favored or leaned toward favoring it, with 20 percent undecided.  The results were even more striking when only those with strong opinions are counted—30 percent strongly oppose the project, with only six percent strongly in favor.  Significantly, the results were essentially the same in Coos County, despite Jordan Cove’s relentless public relations campaign and claims of strong local support.

These regulatory processes have been a key focus for Oregon Shores’ Land Use Program for many months.  Still to come is a crucial battle on another front, the local land use permitting process.  The local land use regulations can be an Achilles’ heel for huge multinational projects.  While Coos County approved Jordan Cove’s land use application the last time around, Oregon Shores successfully appealed this approval to the Land Use Board of Appeals, and won.  The victory was temporary, because Jordan Cove’s application at the federal level was rejected by the Federal Energy Regulatory Commission (FERC), so the company didn’t fight any further at the time.  Instead, Jordan Cove started a new application process, hoping for better results from FERC under the Trump administration.  They will have to apply again at the local level, and Oregon Shores will take the lead on behalf of LNG opponents in resisting local approval.

Without local land use approval it should be harder for state agencies such as the Department of Environmental Quality and the Department of State Lands to issue permits regarding water quality, dredging and other aspects of the project.  This in turn means that the state could not certify the project’s compliance with the Coastal Zone Management Act (CZMA) which should make it harder or impossible to get federal permits. Under CZMA, the federal government is required to be consistent with a state’s approved coastal management program, so if a state declares that a project is non-compliant, the federal government should theoretically honor that decision by rejecting federal permits.

As these various processes continue, with the fate of the Coos Bay estuary and North Spit in the balance, we will provide updates and suggestions for making public comments.  For more information, contact Phillip Johnson, (503) 754-9303, [email protected].