With Oregon Shores' 50th anniversary having taken place in 2021, the beginning of our second half-century is a good time to reflect on our long history of protecting the Oregon coast.  The Beach Bill established the public’s right to enjoy our state’s entire shoreline up to the vegetation line (we celebrated its 50th anniversary in 2017), and Oregon Shores has been working for more than 50 years to preserve those public beaches, and the entire coastal region. 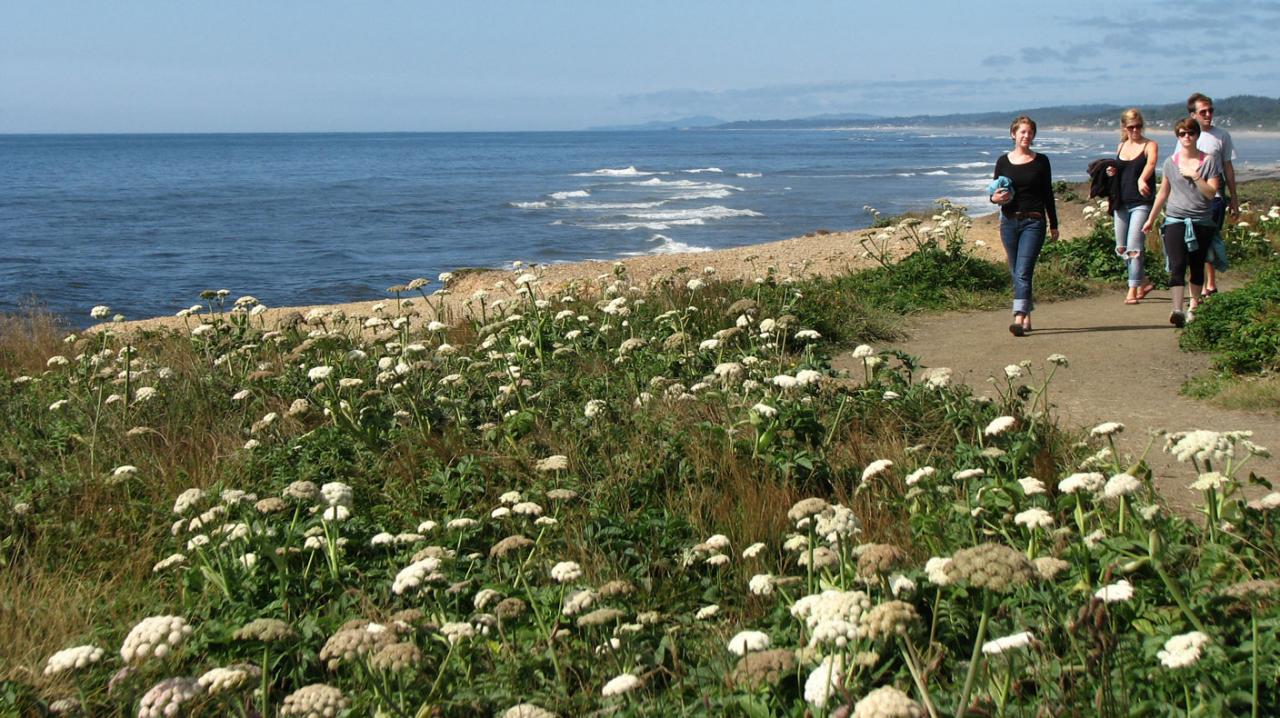 Preserving the 804 Trail at Yachats was one of Oregon Shores' early accomplishments. Photo by Laura Neary.

The Oregon Shores Conservation Coalition, founded in 1971, evolved from the ad hoc group, Citizens to Save Oregon Beaches, which campaigned for the passage of Oregon’s famed Beach Bill.  That legislation, reserving all of the state’s shoreline up to the vegetation line as a public area, was passed by the Oregon Legislature in 1967, and re-passed in 1969 with a specific, surveyed upland boundary (the “statutory vegetation line”).  After a short lag time, some of those who had pushed for the Beach Bill, notably Bob Bacon, who had led the campaign, joined forces with other coastal enthusiasts to found the new organization as a watchdog over the newly protected public beaches.

During the course of 50 years of advocacy on behalf of Oregon’s coastal resources, the focus of Oregon Shores has steadily widened, eventually to encompass the entire coastal region from the crest of the coastal mountains to the edge of the continental shelf.  The name, Oregon Shores, is thus anachronistic in a sense, since the group now seeks to protect far more than the shoreline, but it is a time-honored name under which many battles have been fought and is retained in recognition of five decades of service, during which thousands of Oregonians have participated in coastal conservation under the Oregon Shores banner.

Under its original, volunteer executive director, George Diel, Oregon Shores quickly established itself as a force to be reckoned with when it came to land use and shoreline management issues.  The group played a leading role in pushing for protection of Yaquina Head, creation of the South Slough National Estuarine Research Reserve at Charleston, and preservation of the public right-of-way along the shoreline at Yachats which became the 804 Trail.

Many dedicated coastal conservation advocates have played leadership roles in the intervening years, notably Marguerite and Howard Watkins during the 1980s and Fran Recht, who served as conservation director and president during much of the 1990s and the early part of the present millennium.  Attorney Steve Schell, who helped to found Oregon Shores and then left to serve as a member of the first Land Conservation and Development Commission, returned to the board after his term with LCDC and served more than 30 years. Anne Squier also left the first Oregon Shores board to join Schell as one of the first LCDC commissioners; they played key roles in creating the four special coastal goals within our land use planning system.  Squier, a law professor who held many resource managagement positions, also returned to the Oregon Shores board later and served a long stint as treasurer.

In late 1993, then-board member Phillip Johnson founded the CoastWatch volunteer program, which became the first program in the nation through which the citizens of a state have adopted their entire shoreline, and remains one of the organization’s key programs.  As CoastWatch grew, Johnson moved to a staff role, first as volunteer coordinator, and since 2009 as Oregon Shores’ executive director.  Similarly, Robin Hartmann began working on marine conservation issues while a board member, and eventually moved to a staff role as director of what became the Ocean Program in 2005, serving as our Ocean Policy Advocate during the crucial period when we were part of an active coalition pushing for the creation of marine reserves.  Oregon Shores began advocating for the creation of marine reserves off our coast in 2000, and was one of three founding members of the Oregon Ocean coalition, later renamed the Our Ocean coalition, which spent most of a decade campaigning for marine reserves.  Beginning in 2012, Oregon's current system of five marine reserves and associated protected areas came into being.  Oregon Shores then became one of six groups that founded the Oregon Marine Reserves Partnership to build grassroots support for the reserves and use them as the basis for public education about marine resources.  This consortium still exists, and the member groups are preparing to work together in support of the marine reserve system as it undergoes a ten-year review.

In 2009, recognizing that climate change would affect every aspect of the coastal environment and thus impact all of Oregon Shores’ work, the organization founded the Climate Program as the fourth of its major initiatives, along with the CoastWatch, Land Use , and Ocean programs.

Oregon Shores has been involved in hundreds of land use, water quality, shoreline protection structure permit and other issues during its long history.  More than 40 court opinions cite Oregon Shores’ often precedent-setting legal efforts on behalf of the coast.  The organization has represented the coast in the legislature, offered hundreds of public education events, and sponsored annual conferences for more than 25 years.  A true regional conservation group, which addresses the full range of potential impacts to the coastal environment, Oregon Shores continues to work to engage hundreds of Oregonians (and many visitors) in a wide range of advocacy efforts and stewardship activities that serve to protect our coastal public heritage.