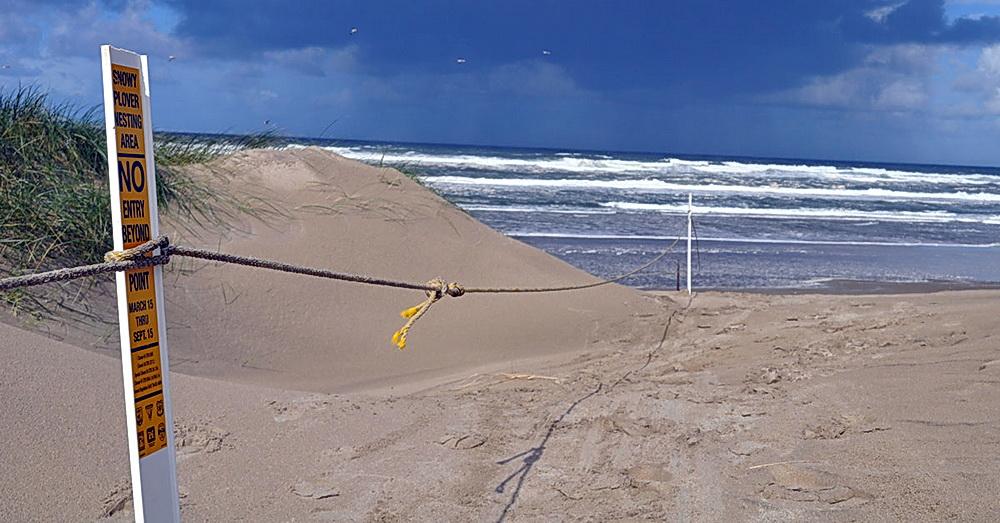 Beachgoers are urged to help recovery efforts of the threatened Western Snowy Plover by respecting nesting areas and beach restrictions.  These regulations went into effect for the year on March 15, and while most of the nesting season is over, the regulations remain in force through Sept. 15. It is important that they continue to be observed to complete a successful nesting season. The plovers, a small shorebird, nest on open sand along Oregon’s beaches. During nesting season, they can become easily frightened by human disturbances and abandon their eggs and chicks. Chicks especially are well camouflaged and are easily killed or injured by bikes and vehicles that stray into closed nesting areas.

“We’re making great strides in reversing the downward slide of this species,” said Cindy Burns, Siuslaw National Forest wildlife biologist (not to mention a CoastWatcher). “But it takes all of us, so we hope people will do their part to understand nesting season rules and to share the beach this spring and summer.”

Certain beaches are known plover nesting areas. On these beaches, the dry sand and dunes are closed to all access, except along official trails, to protect eggs and chicks. Visitors may see roped off areas within these closed areas, which serve to protect to most sensitive habitat; however, all dry sand on both sides of the rope is closed, except on designated trails. Wet sand areas on plover beaches remains open to foot and equestrian traffic (but no dogs, kites/drones, camping, bicycles, or motor vehicles).

Beachgoers wishing to participate in activities not permitted on nesting beaches, have access to many miles of nearby beaches that are not restricted during plover nesting season. Oregon State Parks maintains online maps of dog-accessible beaches during shorebird nesting seasons, for instance.

The Western Snowy Plover is a federally protected shorebird. Nesting areas within the Siuslaw National Forest include the following, and signs are posted at all nesting beach access points:

·         Siltcoos estuary south to within a half-mile of Sparrow Park Road, which includes the Oregon Dunes day use beach and the Tahkenitch Creek estuary

The U.S. Fish and Wildlife Service listed Western Snowy Plovers as a threatened species in 1993. Habitat loss from invasive European beachgrass, as well as human disturbances, including litter and discarded food scraps that attract predators, have contributed to the birds’ decline. Part of the Siuslaw National Forest and its partners’ Dunes Restoration strategy is aimed at removing European beachgrass near nesting areas to improve habitat conditions.

Detailed information about nesting restrictions and site locations, as well as links to resources from Oregon State Parks, can be found on the Siuslaw National Forest website.