Sightings: An Encounter with Marine Debris 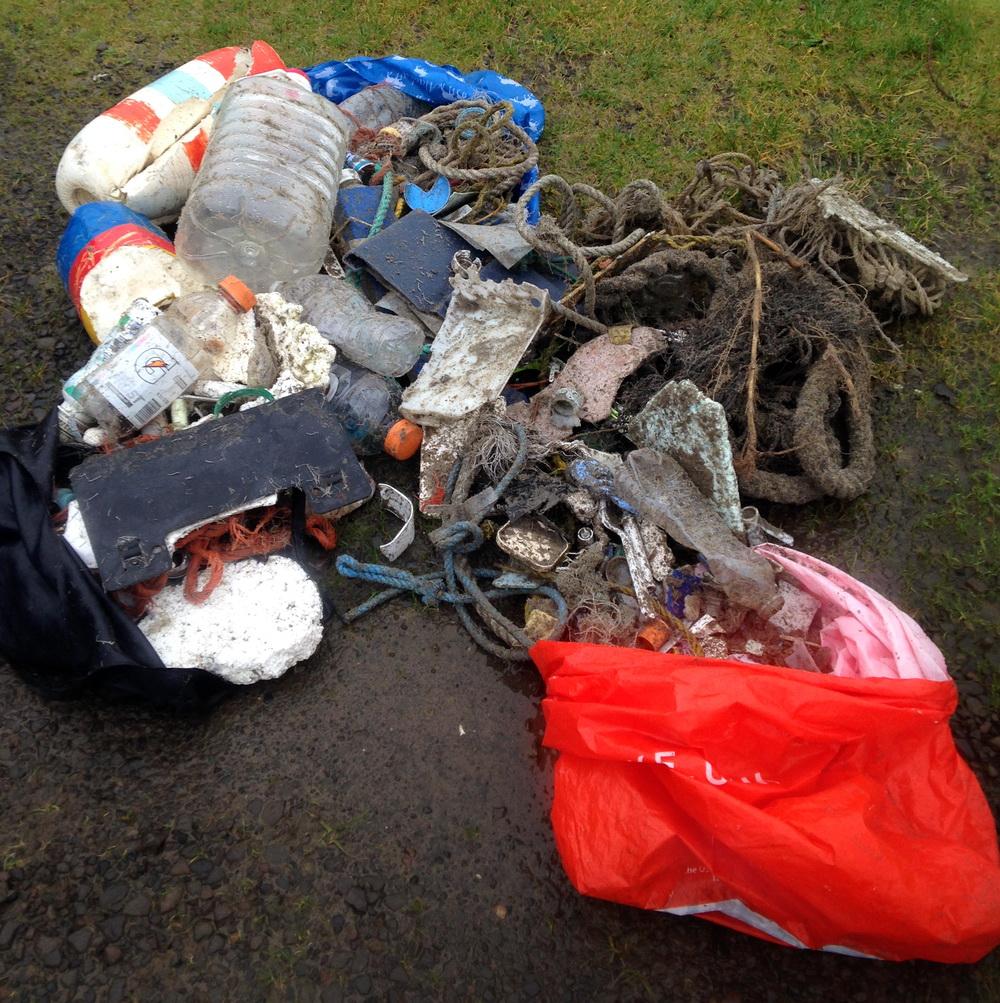 I kick a hairball of grass and twigs and stems, sometimes called a whale burp, and more often than not see mesh, a bottle cap, a soap dispenser plunger. Down the way is a skinned baseball, a strange planet crash-landed among the gaper and cockle shells. There's half a lighter beside busted sand dollars and smooth dark stones. The sandy fishing rope comes in so many lengths and colors: bright orange, faded turquoise, dark gray.

Bayocean Peninsula is often unpeopled. It's not near a large city. It feels wild. Where's all this coming from?

On a recent trash cleanup for my wife’s and my adopted mile, I find a large red lightbulb. It is barnacle-studded and has Japanese lettering. I go online. Turns out squid fishermen throw them over the side once burnt out, although it could also be a tsunami leftover. But don't think all this debris on the shore comes from the tsunami. Things circulating for years get unstuck from the Great Pacific Garbage patch, floating out of history onto our shores. By blaming the tsunami we run the risk of thinking there's a foreseeable end.

There are many floats: they come in canary yellow; red and white; green and cherry. People thread them through tree branches. They are often cracked and spilling Styrofoam; like plastic, it photodegrades, the sunlight breaking it down into fake fish food that stunts growth and raises mortality rates. Similar accidents occur on up the food chain. Sperm whales washing up over in the North Sea in 2015 were full of nets and car parts.

Chris Jordan's piercing photos of bloated Midway Island albatross are another chapter in the tale of the cost of our convenience: mother birds feed their chicks the same plastic caps and lighters I see strewn around Bayocean. Here I see sandpipers. I see cormorants. I see a block of wood a hundred feet away. It moves. I realize it's a bald eagle.

I stop at Safeway to sort found garbage and recyclables. Inside, I feel hopeless looking at rows of overwrapped goods. I've collected roughly ten shopping bags of debris in a month.

I go online. According to NOAA, we cannot simply skim the top of the patch for garbage. Calling it a garbage patch is in fact misleading, since over 90% of what we're dealing with is smaller than pepper-sized microplastics. The Ocean Cleanup has a lot of corporate sponsorship and a cool website, but critics suggest their vacuum technology will be unable to suck up the micros, which the Ocean Cleanup has not disputed, claiming they are interested in catching larger debris before it breaks down.

While technological efforts to fix the problem are laudable, waiting offloads responsibility. It seems simpler to start by reducing plastic consumption where possible, to not litter, and to join marine debris cleanup events or communities.